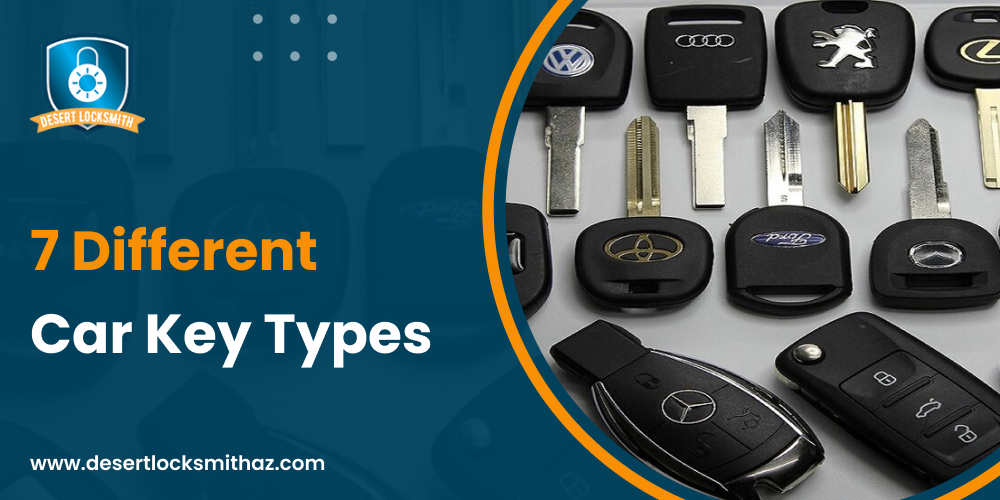 For most of the car’s history, everything from starting it up to opening the trunk was done with a simple mechanical key. A variety of upgraded security advancements have transformed the way people access their vehicles during the last three decades.

You may need to replace your car keys in a variety of conditions. The transponder may stop working, the key may break in the ignition, or your keys may have been stolen or misplaced. Knowing what type of key you have might help you budget for the costs of replacing lost, stolen, or broken keys.

There are various varieties of cars, each with its own set of modifications, ranging from the wheels to the keys used. Different standards apply to these keys. The following are the seven most popular varieties of car keys:

Mechanically cut car keys are one of the more traditional forms of vehicle keys on this list. This is the most basic sort of automobile key used today, sometimes known as a standard car key. These keys are typically used by older automobiles that lack security encoding. This style of the key can be created with any metal-cutting machine.

However, while these keys are the simplest, they aren’t the most secure. Typically, these keys are constructed primarily of metal. It means that several methods can be used to duplicate the key. Mechanically cut automobile keys can be duplicated using standard blank keys.

These keys are typically used for simple operations like remote unlocking and locking of vehicles. To deliver an encoded message to the receiver in the car, the security device will either use an infrared signal or, more often, a radio transmitter. Remote car keys are usually battery-operated and contain a button on the key fob that disables the car’s alarm system.

A remote auto key allows users to lock or unlock their vehicle from a safe distance. A remote key must be placed into the ignition to start the vehicle, unlike smart keys, which can open the vehicle without physical touch. Take the advice of a locksmith service provider to know if remote keys are useful for your use.

A microchip is embedded in the key handle, making it more secure than a standard automobile key. Since 1995, transponder car keys have been in use. A sensor responds to the transponder being plugged into the ignition. A transponder key duplicate might cost anything from $40 to over $100. A dealership may charge roughly $250 to replace everything, whereas professional car locksmiths may charge less.

The rolling code key is another sort of transponder key. This key, which was first introduced in 1999, sends a different code each time the automobile is used, securing the vehicle more effectively than regular transponders. The cost of replacing this sort of key is often $500 or more per key.

This key, often known as the switchblade key, folds inside itself. A button will always pop out the key for you to use. The key’s base or shank can be retracted into the key’s head or fob in this case.

A switchblade key is similar to a switchblade knife in that it folds in on itself. There is usually a button that pops out the key for use. It can cost between $200 and $300 to replace the entire item, while just the shank can be changed for roughly $75.

Smart keys aren’t real keys because they’re supposed to stay in your pocket and don’t need to be unlocked. A car with a smart key system will have a set of antennas that detects the presence of the smart key nearby.

If the smart key is present, the car’s immobilizer will be disengaged and the ignition will be started with a push of a button. Smart keys are fobs that, when within range of the car, allow the car to be turned on with a single button click. It is not necessary to place it in the ignition. These keys must be replaced at the dealership and can cost between $200 and $400.

Many early automobiles came with a master key that could be used to duplicate or replace keys. It wasn’t designed for everyday use. Master keys cost hundreds of dollars to replace, and in extreme cases, the entire engine management system had to be replaced, which may cost thousands of dollars.

Most automobiles nowadays do not come with master keys, but if you buy a used car, read the owner’s manual to determine if you should get a master key along with the other keys.

Valet car keys are intended for use by valet services. When using these convenient services, vehicle owners will be able to hand over a specialized key with limited functionality if they have a spare valet key. Finally, this is a more secure method of using valet services for drivers.

The only functions of a specialist valet car key are to lock and unlock the doors and start the ignition. A valet key, on the other hand, will not be able to open a closed glove box or trunk. Many drivers keep valet keys on hand in case they lock themselves out or misplace their keys.

You can always consult a professional car locksmith about which keys are best for your usage, you can also change the lock accordingly. Check out Desert Locksmith, one of the most reputed locksmiths, they can help you with any locksmith problem.