8 reasons why your car key is not working 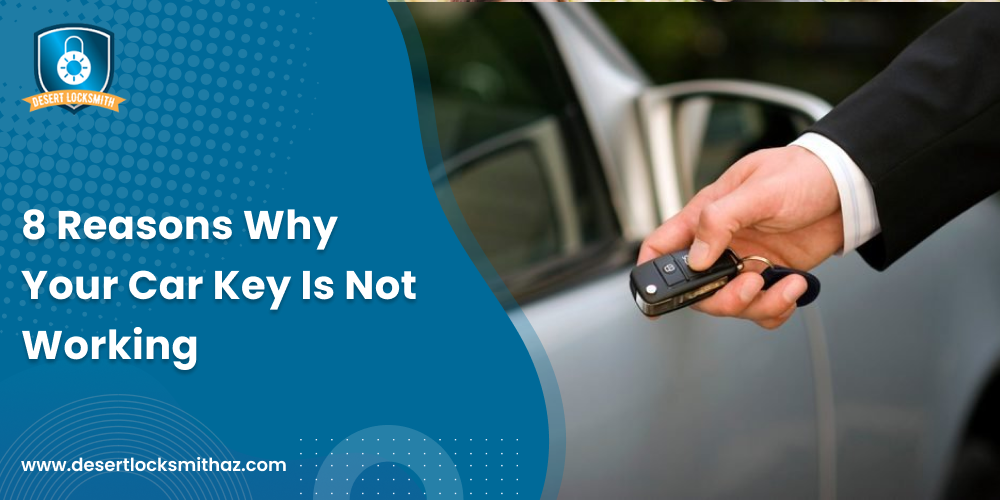 None of us ever consider the possibility of having to get a car key replacement. We usually take precautions, so we can’t lose something this significant. However, losing the keys isn’t the only situation that can be problematic; failing keys can also be a serious issue. You hastily walk over to your car, unlock the door, and turn the key to start the engine, only to discover that it won’t start. Though the problem may be with the key rather than the car itself.

Many of us have experienced it, leaving us to wonder what went wrong. For you to grasp the genuine causes of most car owners’ problems and the potential causes of your car keys no longer working, we at Desert Locksmith have listed them below.

The automobile keys could be physically worn out, which is one of the most obvious causes. There might be a broken car key if it is not working. Older or more ruggedly used cars have a problem with this. A lack of upkeep could affect the pattern. Over time, the grooves could become scratched.

There comes a time when the key is damaged, albeit you might not immediately notice it. But it will stop the key from working properly. A reset would be necessary if a modern key fob had mechanical problems, which could be a concern.

Another frequent cause is broken car locks, which may also cause the key to break if excessive pressure is used when turning the key. Once more, it affects older vehicles or those that have seen heavy use.

Regular use wears down the lock over time and damages its internal workings. In addition, the keyhole could be blocked by debris or other impurities, which is another reason why your key might not function properly.

3. Ignition may be faulty

The ignition in the car experiences daily wear and tear as well. Take a quick check regardless of whether the key is new or old-style; if it opens the doors and trunk without issue but not the ignition, you know what the issue is! There is a bigger problem to deal with right now.

The interior mechanism of the car is still prone to harm, just like the outward parts. The internal lock mechanism allows the key to access the ignition system in addition to the external lock. Therefore, a malfunctioning ignition could be one cause of your car keys not working.

Your keyless remote’s batteries may have run out, which is another frequent cause of non-operation. Your key fob batteries are only intended to function for a limited time before becoming useless.

Check the batteries if the fob isn’t broken or influenced by outside forces. Replace them with new ones, which is the easiest fix, and you’re set to go.

5. Aftermarket keys are in use

The possibilities are that your problems, which result in the keys malfunctioning, may be caused by the fact that you’re using an aftermarket key instead of the original one. The aftermarket is an excellent area to obtain inexpensive replacement car parts. However, unlike the originals, these aren’t made to always operate in concert with your car.

The same is true for a car key replacement. Duplicate keys are just one of those blatant reasons why your automobile won’t start, even though they come in useful if you’re locked out of your car.

6. The key fob is damaged

Problems can arise with keyless, electronic-start vehicles as well. The key fob may malfunction if it is exposed to dangers including water, moisture, heat, improper handling, dropping, banging, and more. Due to these issues, the key is unable to send any signals that might affect the fob and cause it to be out of alignment.

You may program a wireless key to operate your car. Your car’s responder and the transmitter inside the fob communicate with one another. The responder receives signals from the fob when you lock or unlock so they may take the necessary action. If the key doesn’t work, it probably wasn’t programmed for your car.

Key fobs lose their basic programming when their batteries die. The programming may have been interrupted if you recently received a duplicate key or aftermath. Therefore, the key fob must be paired with the vehicle it is used with. So, you will need to reprogram the automobile keys to inform both the receiver and the transponder that they should be communicating with one another.

Turning the key in the ignition won’t make it operational if the gear is set to a position other than park or neutral. The keys may function properly when you adjust the gears or shake the stick slightly. However, if the issue continues, you might think about consulting a professional because something else might require your attention.

Don’t start panicking or worried if your car keys are not working at an odd time too, call Desert Locksmith and they will be there to help you as soon as possible.