Why Are Replacement Car Keys Expensive? 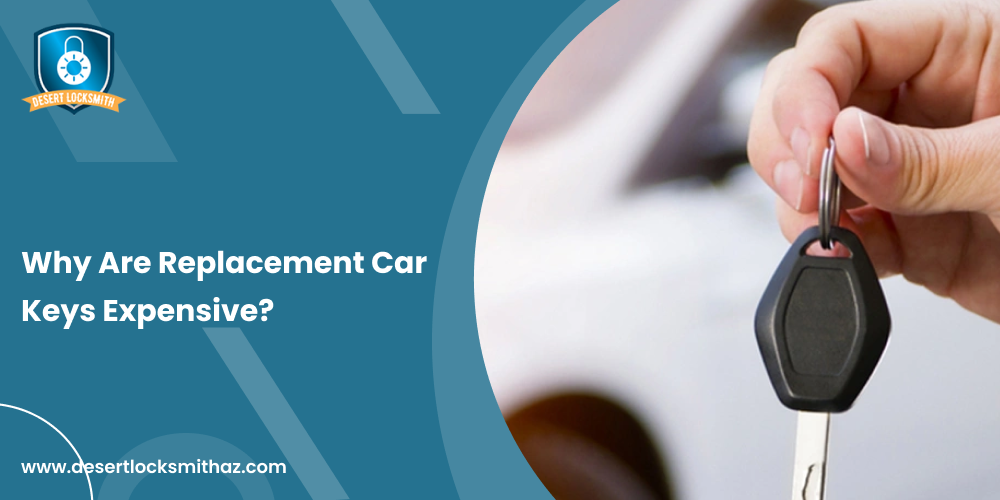 Our car keys have a peculiar propensity to disappear entirely, disappear inside coat pockets, or disappear beneath couch cushions. This disappearing act wasn’t a major concern before the 1990s. Any hardware store, car locksmith, and, of course, the car dealership could provide you with a replacement key. However, a burglar could also easily steal your car thanks to how simple it was to make a new replacement key. Modern key fob technological advancements have made cars harder to steal but at a price of more expensive car key replacements.

The costs involved in replacing your key are listed below, along with several options that can result in cheaper costs. The pricing listed below might differ for components and labor in your area.

An electronic key fob, usually referred to as a remote or transmitter, is an essential component of the key set on the majority of modern cars. Depending on the carmaker and design complexity, a new key fob remote can cost anywhere from $50 to over $100. Every key fob requires programming. While some will charge between a half-hour and an hour for work, some dealerships will perform it at no charge.

The cost can be avoided, though. The majority of key fobs can be set to respond to a certain pattern of remote control button presses and ignition key rotations. You can find instructions for doing it online as well as in some owners’ manuals.

Finally, you can get aftermarket key fob remotes from a locksmith or online. Although the quality can vary, like other aftermarket goods, they are a more affordable option.

Manufacturers started embedding a transponder chip in the car key’s plastic head in the mid-to the late 1990s. A receiver in the ignition receives a signal from the chip. The vehicle won’t start if this “immobilizer” detects the incorrect signal, indicating that the incorrect key is in the ignition.

Others will charge up to an hour’s worth of labor, while some may program it for free. Most automobile locksmiths ought to have access to these tools as well.

The transponder key and the fob may be combined into one device in some cars, which raises the cost of replacing a car key and restricts where you may get a replacement.

We calculated the cost of a straightforward transponder key for an old Ford. We received a price from the dealer for the new key at $160 and the fob at an additional $75. Expect to pay between $20 and $30 less if you visit a locksmith.

Ordering a standard vehicle key without the transmitter could be a feasible low-cost alternative for getting into your automobile. If you ever forget your keys inside the car, you can use this key, which can do everything but start the engine.

If you frequently misplace your car keys or lock them inside, you may be able to save money on programming by making a third car key to keep on hand as a backup. A few car companies will let you program a third key on your own if you already have two car keys.

This new key can be made by a locksmith, and you should then follow the programming instructions, which are typically included in your owner’s manual. If the instruction manual isn’t clear, try looking it up online. Try using the search words How to program a (enter your year, make, and model) key.

However, we advise you to verify with the dealership or your neighborhood automobile locksmith to see if the procedure will work with your automobile before you try this method and spend money on a key.

The shank of a laser-cut key is slightly thicker and has fewer grooves carved into it than a standard vehicle key. Due to the characteristic winding cut on the shank of laser-cut keys, they are frequently referred to as sidewinder keys. The equipment required to cut these keys is substantially more expensive than typical key-cutting equipment, and it is less likely to be available at every hardware store or locksmith.

Additionally, laser-cut keys feature transponder chips that must be activated at the dealership or by a locksmith, ideally one who is an Associated Locksmiths of America member (ALOA). Visit the ALOA website to find a certified locksmith in your area.

All-in-one laser-cut keys are gaining popularity, but as we already noted, they are more expensive and frequently require a dealer replacement. They can cost between $150 and $250 with labor.

Switchblade keys have shanks that, when not in use, fold into the key fob and, with the push of a button, pop out. They can be cut with a laser or with a simple cut. The switchblade key fob has the minor benefit that each of its parts can be purchased individually. You may purchase the shank separately for between $60 and $80 if your key becomes broken and ceases to function for some reason. The more likely scenario, however, is that you’ve misplaced your key, in which case you’ll also need the fob it folds into, which can run you between $200 and $300 after the programming for both items is taken into account.

A “smart key,” usually referred to as a keyless entry remote, isn’t a car key in the conventional sense. It is a key fob that is either kept in your pocket or purse or is placed in the dash of newer vehicles. Once inside, the driver simply needs to push a button to start the car.

The ability to employ rolling security codes is the primary method of security for a keyless entry remote. To prevent robbers from hacking it with a tool known as a code grabber, the system generates the right code at random. The smart key’s code is recognized by the car’s computer, which then confirms it before the engine is started.

One of the first automakers to employ this technology was Mercedes-Benz, which also came up with the name “smart key.” Now, every vehicle in its lineup employs a smart key technology. Despite this, this technology is not theft-proof, and there have been several instances where sophisticated thieves have used smart keys to break into vehicles.

A smart key is now included with almost all car brands’ higher trims or technology packages. Any vehicle, from a Ford Escape to a Nissan Altima, can be equipped with a keyless entry remote.

Your alternatives for a fresh key are limited by these keyless entry remotes. It is necessary to get the replacement remote from the dealer or a factory parts reseller. While carrying smart keys in your pocket or purse is convenient, you will suffer the most if you lose them there. For some high-end vehicles, the cost to replace and reprogram a smart key can range from $220 to over $500.

Modern keys are unquestionably pricey. A strong offensive is therefore the best line of defense against losing them. Instead of stressing out and spending the money in what might be an emergency, it is best to buy a car key duplication service now.

Last but not least, if you’re someone who only has one set of keys, think about this: If you lose all the keys to your car, you’ll need to have it towed to a dealership, and it might cost you close to $1,000 to replace the locks. Instead call an emergency locksmith service provider to deal with any kind of situation, as they will affordably do their best.